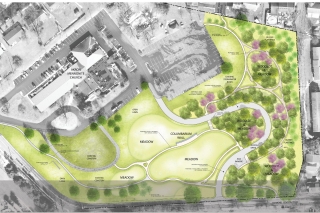 A portion of this preserved 4.3-acre open space will be used for the depositing of human cremains within a meadow and restored woodland environments

Borough approval was received for expansion of an existing, nonconforming cemetery use

Design for Contemplation, Reflection, and Preservation
In 2012, the Akron Mennonite Church Memory Garden & Nature Preserve concept was initially conceived by Akron Mennonite Church (AMC) leaders as an opportunity to serve the end-of-life needs of their congregation, along with the needs of their surrounding community. To make their concept a reality, the church had to first preserve the land to avoid it being developed for future use.

RGS Guided the Preservation of the Memory Garden & Nature Preserve’s Land
AMC leaders chose to preserve the future site of its memory garden and nature preserve in perpetuity as a restored open space. To make that vision a reality, RGS successfully navigated the 27-month approval process that was ultimately necessary to preserve a property that could have otherwise been more intensively developed for other uses.

With its Land Preserved, AMC Can Begin its Plans to Transform the Property
With support from RGS, AMC will now work to convert the agricultural portion of its site to open space consisting of woodlots and meadow landscapes. These spaces will be accessed via new curvilinear drives and walkways to link site amenities, including a proposed memorial wall. Approximately 30 existing trees will be preserved, an additional 160 native trees will be planted, and 2.8 acres of new meadow will be seeded. With its planned construction and reintroduction of indigenous plantings, this concept takes a bold step toward the restoration of plant and animal species while providing an alternative to traditional burial practices.

The AMC site includes a 40 ft. elevation change and the project program required ADA-compliant routes, both within the site and at its perimeter. Due to this topography, Akron Borough requested a viable alternative to sidewalk construction. AMC agreed to construct an accessible walkway for public use, although it will not be located within the public right-of-way, given steep roadside grades.